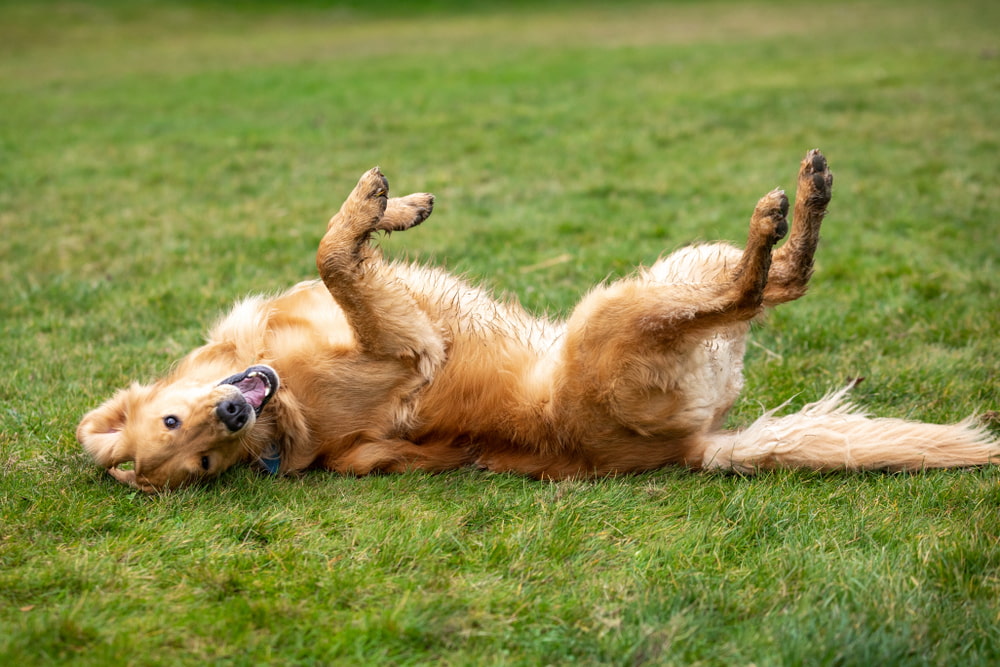 I’ve Spotted Something Green, Must Go Roll In It

All pet parents know that dogs have a strange affinity for grass. But, why do they love rolling in the grass? Well, there are many reasons.

You’ve planned a fun playdate for your pup at the park. But rather than playing with you or the other dogs, your dog is content to wiggle around on the grass, seemingly having the time of its life!

Sometimes, some things our dogs do seem to make no sense. Dogs and their affinity for grass is one such phenomenon.

So, why do dogs roll in the grass?

This dog habit can be quite annoying, especially if you’ve just given it a bath. But it’s far easier to train your dog to do something else than to stop them from rolling around in dirt and grass. Besides, your dog often has good reason for turning the grass into its massage bed.

If you’ve been asking why do dogs like to roll in the grass, keep reading for the many reasons they do.

You must have observed your dog stopping at random points to take a pee break while out on a walk. Or you may have noticed it rubbing up against a favorite toy. That is its way of marking something as its property. It’s the same when you see a dog rolling on its back on the grass.

Your dog is probably just marking that spot of grass as theirs. Dogs also have a much more complex and developed olfactory system than humans do.

Your dog can smell scents that we can’t even detect! So, when they’re rolling around in the grass, they’re actually leaving traces of their scent — a signal to other dogs and animals in the area that it’s their property.

Did you know that dogs have 300 million olfactory receptors, 30 times more than the measly 6 million humans have?

Canine behavior expert Simon Gadbois believes that dogs might roll in the same grass as other dogs to leave their combined scent on an area and form a sense of togetherness. If you have multiple pets, you may have seen this happen when your dogs are rolling around in the grass together. 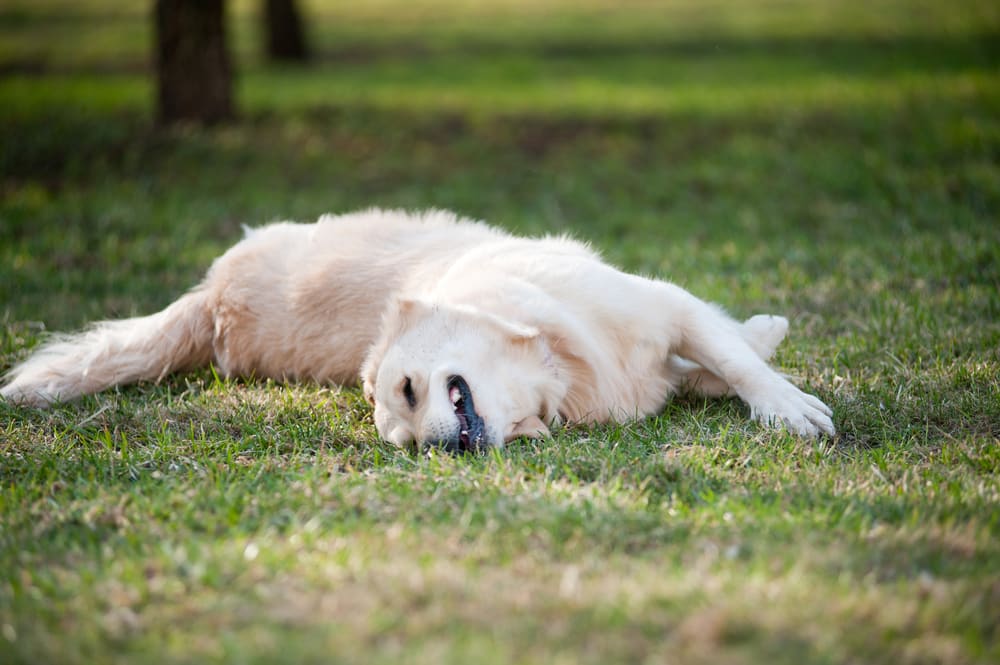 Covering Up A Scent

According to Dr. Stanley Coren, the most likely reason dogs roll in the grass is an ancestral instinct to mask their scent. That makes sense when you look at dogs’ wild cousin — the wolf.

Scent rubbing in wolves is quite normal. Let’s not forget that wolves are apex predators. They use urine, scat, or even carcass to mark their territory and communicate to other animals that the area is now theirs. Scent rubbing also allows them to disguise their scent with whatever they roll in, allowing them to get closer to their prey without alarming it.

Rolling around in grass might be your dog’s natural instincts kicking in. Your dog may be trying to conceal its scent and thinking that the smell of freshly cut grass is the perfect disguise.

You know that frustrating feeling of having an itch in a spot you just can’t reach? It is the same for your dog too.

So, if you see your dog rolling on its back scratching itself, it might be because they want to relieve an itch. It’s the same for dogs who occasionally rub their ears against the grass — they may be doing it simply because they’re feeling itchy.

However, if this is a persistent occurrence, don’t take it lightly. Be on the lookout for how often your dog rubs its back or ears against the ground. It may be a sign of a skin problem or an ear infection. In that case, schedule a trip to the vet right away. 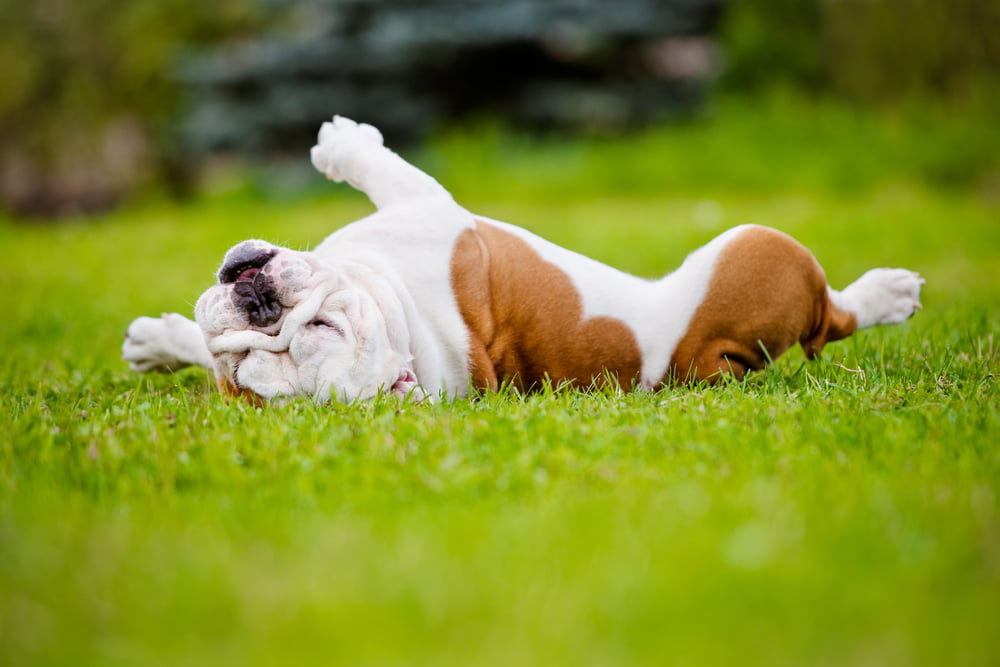 Allergies are common in dogs of all breeds. However, some breeds are more susceptible than others. Allergies in dogs usually stem from food, medication, environment (e.g. pollen, dust mites, mold spores), or other elements like a new shampoo or soap.

They Simply Love It

Dogs don’t always need a reason to do something. So, why do dogs roll around in the grass?

And who can blame them? Stretching out in the soft, fresh grass with their paws pointing toward the sky — can you imagine getting more relaxed than this?

You will also notice a difference between your dog rolling around trying to get rid of an itch or alleviate some irritation compared to a leisurely stretch involving some amount of twisting. If your dog appears happy and relaxed, there may be no actual motivation for being out in the grass. The opportunity presented itself, and your dog merely took it.

However, constantly rolling in the grass can put your dog at risk of a flea infestation, especially if there is other wildlife like squirrels, rabbits, or even other dogs. Keep an eye out for flea bites and be informed about the ideal way to deal with fleas and ticks to keep your dog clean and comfortable.

Sure, the mud trails and dirty paws might get annoying, and you might worry about your dog attracting grass mites, but there are easy fixes to these. You can always give your pup a bath or send it to the groomers after a particularly messy playtime in the yard.

Although this behavior could also be a sign that your dog is just bored. Think about how much playtime and exercise your dog is getting and whether it’s sufficient for its breed and age. 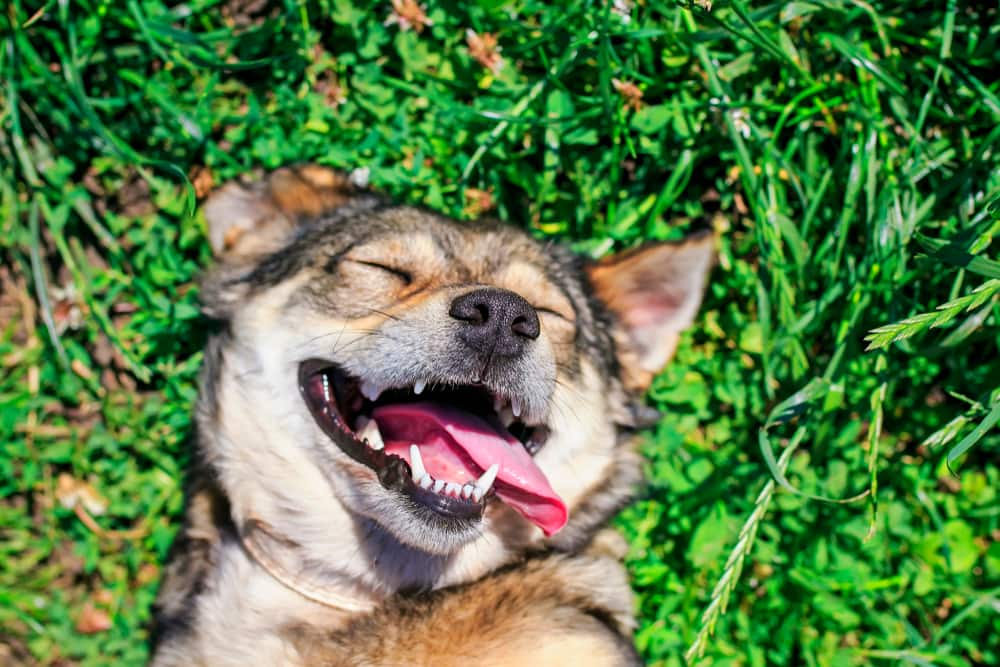 Should I Let My Dog Roll In The Grass?

For the most part, rolling in the grass is completely safe and normal. This is not a behavior to worry about, especially if it makes your dog happy.

“My Scottish terriers love to roll in the grass on their backs and it looks like they are doing the dance of joy!” says Jennifer McWarnock, Dog Mom.

The only time you might want to limit their time on the grass is if they have allergies or skin irritation, their vaccinations aren’t complete, or if their seemingly harmless playtime damages your yard or your neighbor’s property.

Is It Bad For Dogs To Roll In Grass?

Not necessarily. Dogs love rolling in the grass because it smells good and feels good against their skin. There’s nothing wrong with this behavior as long as your dog does it for fun and it’s not causing health concerns and property damage.

Should I Stop My Dog From Rolling In Grass?

It’s an exercise in futility to train a dog not to do something, but there are times when you will need to step in. For example, if your dog is jumping the fence, rolling on your neighbor’s property, and making a mess, train it to stick to your yard only. If your dog is trailing in mud and dirt, train it to roll in clean grass or wait at the door so you can clean it before it comes indoors. And if your dog has skin irritation or open wounds, stop it from rolling outside until the problem is resolved.

Why Do Dogs Roll In The Grass After Bath?

Dogs love the scent of familiar humans. They also like each other’s scents. But, this becomes an issue when they smell feces, dead animals, or decaying plants in the grass — dogs seem to be drawn to such scents and will not hesitate to cover themselves in them.

Some dogs also don’t like scented shampoos and soaps. So, in their valiant attempt to get rid of what they think is a bad smell, they will cover it up with the smell of grass and the outdoors. That’s another answer for why do dogs roll on their backs in the grass. 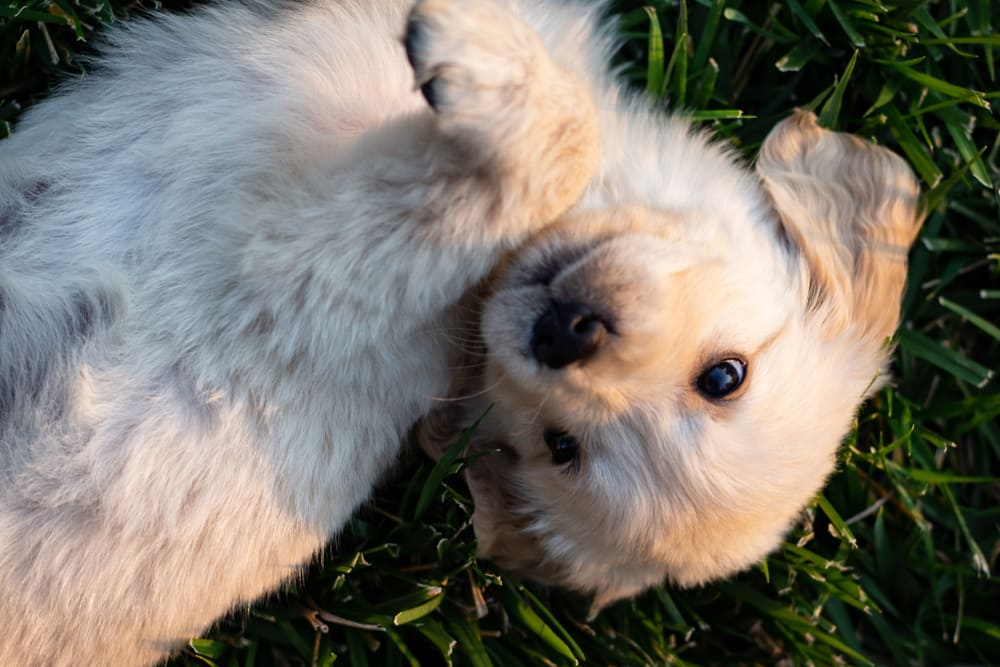 If you see your dog rolling in the grass, let it! Your dog’s probably just having a whale of a time.

That said, observe your pet. If you think your dog rolling on its back and vigorously moving around is a cause for concern, don’t hesitate to schedule an appointment with the vet.

What other reasons could dogs have for rolling in the grass? Leave a comment below!

General why do dogs roll in the grass

Hounds And Halloween: What Do Dogs Really Think About Those Spooky Costumes and Displays 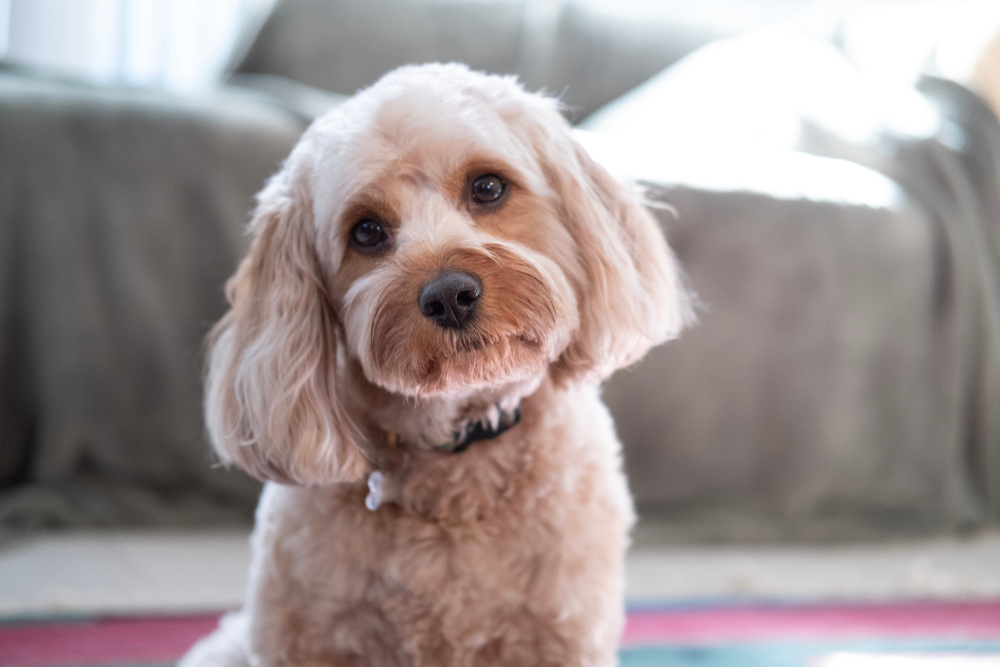 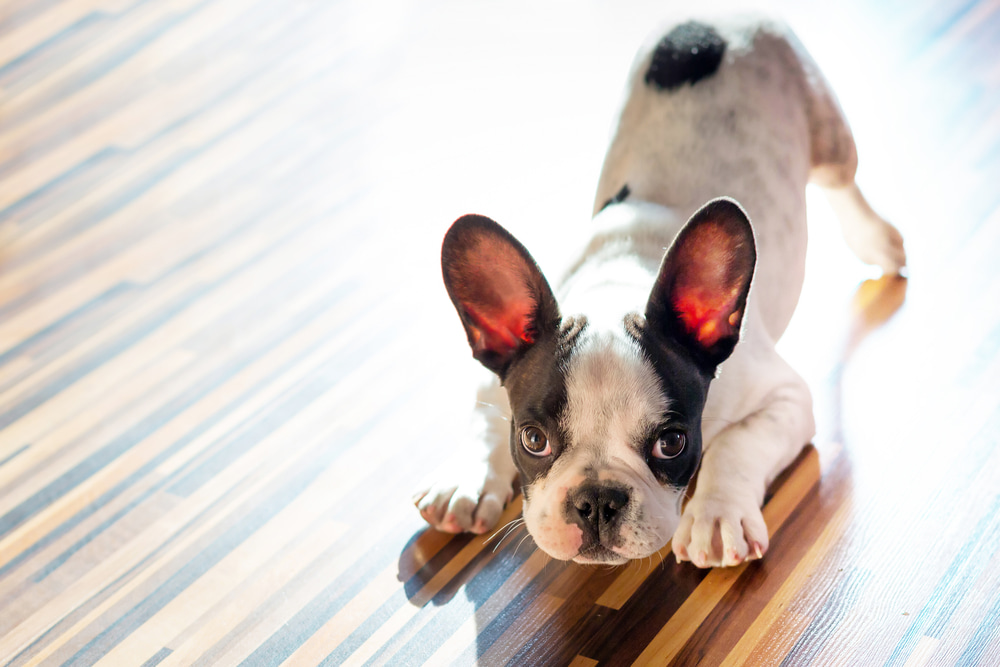 Should You Be Worried About Your Dog Scratching the Floor? 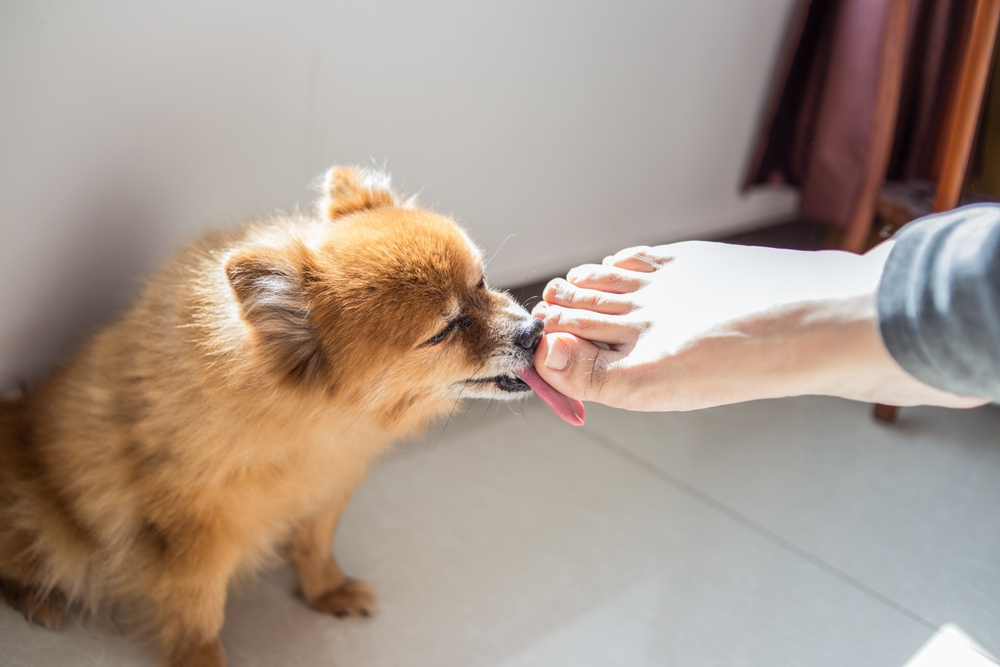 Deciphering The Mystery Of Dogs Licking Your Feet